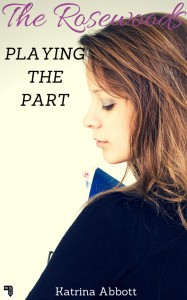 Get Playing the Part now at your favorite retailer.

Excerpt from Playing the Part by Katrina Abbott.

I was probably the first girl ever to arrive at The Rosewood Academy for Academic Excellence on foot. But it was either get out of the cab down the road and hike it with my overloaded backpack and my mother’s giant Bric’s travel duffel, or get the driver to bring me inside the gate and be seen getting out of a cab.

Don’t get me wrong: I had no issue with taking a taxi from the airport, and truthfully would have taken a bus if one came way out here to the sticks, just to save the fare, but being seen getting out of one would have been akin to me banging a huge drum and waving a red flag. And the last thing I needed was to be at the center of a scandal on my first day back at school.

I showed my I.D. at the front security gate, but the guard was obviously flummoxed over this unprecedented situation: girls don’t arrive by themselves to The Rosewood Academy. Girls are driven in limos and gas-guzzling SUVs with tinted windows. Some have even been known to arrive by helicopter, but I would have bet my life that never, ever in the history of the esteemed school had one shown up alone and on foot.

“The limo broke down just off the freeway,” I explained, jerking my thumb over my shoulder toward the road. “The tow truck is on its way, but I got tired of waiting.”

The guard nodded, but still seemed unsure what to do. I could almost see the thought bubble over his head: should he help me with my bag? And if he did, he’d be abandoning his post—probably a big no-no in the world of security guarding.

As he reached for his radio to call in reinforcements, I shook my head. “I’ve got it. Don’t worry.”

He looked at me as if trying to figure out if I really meant it or was being passive-aggressive and would complain to the dean later that I had to hoof it with my own bags, but I gave him a wave and continued on. My bag was heavy, but I could manage. And anyway, after the summer I’d had, I practically had Hulk arms.

I walked past the gate and up the long circular driveway, weaving between the limos and other cars, pretending it didn’t bother me that my parents weren’t here to help settle me in like they had been on past move-in days. Maybe it was just as well, since I didn’t want them answering any questions about my summer. I couldn’t tell my friends the truth. Not yet.

As I rounded the corner and made my way past the manicured shrubbery and the precisely spaced flowers of the ever-perfect landscaping, the grandeur of the main Rosewood building finally came into view. The bricks were covered in vines, giving the school that regal ivy-league look, which I guess made sense, since the place was pretty prestigious and only the rich and famous attended. Well, mostly the rich and famous. Some girls got scholarships, if they were smart and very, very lucky.

I took a deep breath and looked up at the huge, intimidating building in front of me. It shouldn’t have seemed so imposing; after all, I’d already spent two years at Rosewood. But this year everything was different. My entire world had changed and I didn’t really fit in here anymore. Not that I’d ever really felt like I did; I mean, my best friend, Celia Thomas, goes here, but other than her, I’d always felt like something of an outsider. But now, I didn’t just not fit in; I no longer belonged.

I’d told everyone I was spending the summer on a film shoot in Africa. It wasn’t as huge a lie as it sounds, since I actually was supposed to be there on location with my parents as they shot the film that was expected to be a huge contender for a Palme d’Or at Cannes. That is, if the director could pull it off, my mother’d said. Though I could tell by the twinkle in her eye that she’d thought it would be a winner, too.

That was the plan, anyway, when I’d left The Rosewood Academy at the end of sophomore year as the daughter of two very successful Hollywood producers.

But the movie had fallen apart when one of the financial backers had pulled out at the last minute, apparently not buying that the director could pull it off. And then the house of cards began to fall; more and more people abandoned the project and the A-list stars had started suing my parents. Then people realized my mother was robbing Peter to pay Paul, which is common enough practice in Hollywood, but when the movie doesn’t get made and no box office receipts come in, Peter, Paul and Petra (my mother) are left with less than nothing. She’d tried to sue the backer who’d pulled out, but that just meant more and more legal bills, and with nothing coming in, well, you see where this is going.

Not to mention my father’s ‘little problems’ as my mother called them: gambling and cocaine. Not so little when you factored in his Hollywood-sized appetites. She tried to hide it from me, but in their business there’s no such thing as privacy, and the juicier the tale, the faster it spreads. And it’s not like Dad was doing much to hide his downward spiral. At least he was back in rehab now, but my mother was a mess, and who could blame her? There wasn’t much I could do to help, so best just to keep out of the way and keep myself from getting sucked into that life.

So instead of having an amazing summer on safari, I worked in my uncle’s fast food joint in Dubuque, Iowa making milkshakes and serving artery-clogging food to people for less than minimum wage. And if you’ve never worked in a fast food restaurant, let me tell you it only takes a couple of shifts before your pores start to ooze grease and you go around constantly smelling of bacon-cheeseburger, no matter how many times you shower. And don’t even get me started on how eau de greaseburger is like pheromones to old guys in hick towns and makes them hit on you and touch you inappropriately while you’ve got your hands full with stacks of dirty plates.

The best tip I got all summer? Don’t work in a fast food joint. Ever.

Get Playing the Part now at: Amazon, Barnes and Noble, iTunes, Kobo, or Google Play.