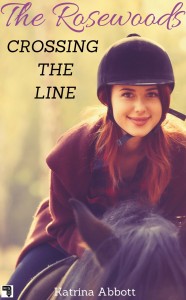 Crossing the Line is Book 10 of The Rosewoods, and the final Brooklyn book. Don’t worry, though – there are still plenty of Rosewood stories to be told! It’s available at all major retailers.

“First things first: he should be a duke.”

My pen froze on the page. I looked up from my Moleskine notebook and lifted an eyebrow at Celia. “Don’t you think Kaylee would think we’re writing about Declan?”

It was a Sunday afternoon and we were sitting on Celia’s bed in her dorm room, minutes into finally starting our writing project after shooing our friends out. We had pulled a bunch of novels off her shelf as reference but had decided to start with some brainstorming.

She screwed up her face. “Maybe at first. But we’ll make him so different that she’ll know right away it’s not him.”

I thought about that. Kaylee was smart, but… “What about an earl?” I pointed at one of the dog-eared paperbacks spread out on the bed between us.

Celia picked up the book and inspected the cover closely. I couldn’t tell if she was thinking or admiring the cover model’s abs. Probably both. “I don’t know,” she finally said. “Earl doesn’t have that same ring to it. When I think Earl, I think of a middle-aged plumber with a gut and a combover.”

She shook her head. “A baron is nothing. And marquess , viscount? I don’t know… No, I think it has to be a duke. Definitely a duke.”

Amazing how much she knew about this stuff. “All right,” I said, not wanting to spend more time on the hero’s title, especially since she was clearly the expert. If she felt so strongly, she could have this one—collaboration was all about compromise, right? “What does he look like?”

She didn’t even hesitate. “Hot, of course.”

I rolled my eyes. “I may as well have asked Chelly. I mean details.”

Her eyes dropped down to the cover again.

“We can assume perfect abs,” I said.

“Of course. But probably longish hair—a lot of men had ponytails back then.”

I thought of Brady and what he’d look like in a ponytail with his dark hair and intense amber-colored eyes. Pretty hot, I bet. Who am I kidding? That boy would look good with a shaved head or a ponytail down to his butt—his hotness was so not about his hair.

But I wasn’t supposed to be thinking about Brady. I forcibly pushed him out of my head before I started to think too hard about what had happened.
“Blond,” I said. “With blue eyes.”

So do I, that’s the problem, I didn’t say out loud. “Because of James. But blondes are nice, too.”

“Not just because of James,” she said, the apples of her cheeks going a little pink which told me a lot of it was about James. Her relationship with her (former) tutor was still kind of new and she was so easily flustered. It was adorable, though I didn’t tease her on purpose—not only did she get prickly about it sometimes, but I was hardly in a position to joke about someone else’s love life.

She smiled. “I do. But he has to be just the right kind of redhead. I think we should stick with brown or black.”

She stared at me for a long moment. “Okay.” She paused as I wrote it down and then said, “So medium brown hair in a ponytail, blue eyes, kissable lips…”

“A given, along with the abs.”

“Tall,” she went on. “Like six-three. Broad shoulders. Big hands.”

“Yep…” I said as I took it all down. “All the romance hero clichés.”

“They’re clichés for a reason,” Celia asserted, straight-faced. She was taking this very seriously.

I couldn’t exactly argue about her profile since our Duke did sound perfect. Especially since he’d have an accent and of course would be perfection on a horse. Sigh.

Enough, I told myself and looked up at Celia. “Any physical quirks or tics?”

Celia exhaled and looked around at the array of books in front of her, considering. “He can’t be completely perfect. He needs to have something wrong with him or something that happened in his past that he needs to work through. But it doesn’t necessarily have to be a disability or something physical. Just tortured somehow. The tortured guys make the best heroes.”

Her eyes went wide. “Yeah. Left on the church steps and raised by nuns at a filthy orphanage.”

I wrinkled my nose. “Does it have to be filthy?”

“Victorian England? Everything was filthy.”

Which brought me to my next point. “And why does this have to be a historical romance?”

She sighed and her face went dreamy. “One of the reasons I love historicals—it was a simple times. Everyone had manners and wore gloves. The glimpse of an ankle was risqué. No computers, no texting…”

“May I remind you that if it wasn’t for computers and texting, you wouldn’t have a boyfriend right now?”

She waved me off, but her smirk told me she was thankful for the technology that had brought her James. “Speaking of…” She reached for her phone.
“Ah ah ah,” I said, wagging a finger at her. “You promised me we’d work for at least an hour. No distractions, no phones. That’s why I turned mine off.” Not that I had a guy sending me love texts, but if we were going to do this, I would go bonkers if she was checking her phone every ten seconds.

Her eyes twinkled in mischief.

“What do you think of Simon Bennett Sinclair, the seventh Duke of Westwood?”