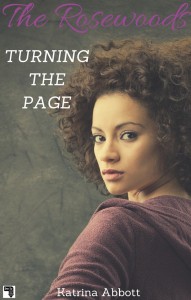 Pick up Turning the Page, Book 9 of The Rosewoods, at your favorite retailer.

Coming from a Hollywood family, it’s amazing I wasn’t addicted to really bad things like drugs or booze. Hell, I wasn’t even addicted to the spotlight like a Kardashian. No, my addiction was a lot more tame. Some might call it ridiculous, one that didn’t even count in the big scheme of things.

My name is Celia Thomas and I’m a romantaholic. That’s right, I’m addicted to romance novels.

I know you’re laughing. You either think that: A. my addiction is stupid and not a real thing or that B. Romance novels are themselves stupid and not worth reading and how could anyone be addicted to what some people call trash.

Call them what you want, I call them my savior. Because when everything else is going wrong in my life, I know I can always turn to a romance book and be sure everything will work out in the end. No matter what. That’s always a truth I can count on in novels. In life? Not so much.

Except that, like any addiction, it had caught up with me and was causing trouble in my everyday life. That’s how they define addiction, right?

Because all I wanted to ever do was read. I read to get my mind off my horrible grades and that I was flunking out of Rosewood. In fact, there was a good chance that if I didn’t really turn things around at mid-terms, the dean was going to boot me out for good.

And while you’re sitting there judging me, I can tell you that while I may not be very smart, I’m smart enough to know that reading novels isn’t going to help my marks. Especially when most of my textbooks hadn’t even been opened and mid-terms were looming. I knew that. Not only because it’s common sense, but because my friends were drilling the fact into my head at every opportunity, as though I hadn’t already figured it out.

Still, I read book after book, looking for the rush of the happily ever after. I wasn’t snobby about it, either; I’d read historicals, contemporaries, paranormals, whatever. Ad as long as there was a hot guy, I wasn’t fussy if he was a cop, cowboy, shifter, secret royal or MMA fighter.
I also read to get my mind off the fact that I had no love life when even my nerdtastic best friend Kaylee had one. Don’t get me wrong: I love Kaylee with all my heart and am really happy for her. Just, it would be easier to be completely and totally happy if we’d both gotten boyfriends at the same time.

Not that I wasn’t trying. I’d thought there might be something between me and Shane Peacock who was my supervisor down in the Rosewood kitchen, but after a few dances at the Masquerade ball, we’d gone back to our former roles of crabby supervisor and girl forced to deal with crabby supervisor.
Also, that I was flunking meant I probably wouldn’t be around Rosewood long enough to have any sort of relationship. So really, why bother?

Well, because I really, really wanted a guy. And I was scared that I was a bathrobe and a handful of allergy pills away from being a crazy cat lady.
Most of my friends were so happy with their boyfriends and while I was happy for them, at the same time it made me miserable. And that I was miserable made me miserabler because what kind of friend was I if seeing them happy made me sad? I tried to hide it as best I could, but it was hard.

All that just stressed me out more. What activity reduces stress? Reading. As does working out, but swimming laps or running on the treadmill still allowed for plenty of thinking and worrying, so while I still worked out to stay strong and fit and be able to compete, reading became my go-to activity. And I went to it a lot.

Too bad there’s no twelve step program for a reading addiction. I needed to break the cycle all on my own. Thank God I had the support of my Rosewood girls. Especially Kaylee and Brooklyn who were both really trying to help. I just needed to get my—

Startled out of my thoughts and almost out of my skin, I dropped the giant spoon into the vat of minestrone soup I was stirring. Even as big as it was, the long-handled spoon disappeared into the pale red liquid. I looked up to see Shane, the very same kitchen supervisor I’d just been thinking about, standing in front of me, glaring. It might have been intimidating if he wasn’t always glaring. In the many months I’d been working in the kitchen for my CSA, I’d gotten used to that glare. In fact, I secretly looked forward to that glare. I’d learned his bark was far worse than his bite. And as hot as he was, I’d happily take any attention, positive or negative.

“I called your name four times,” he said, eyes wide.

I blushed as I looked away from those hazel eyes. The ones framed by long dark lashes that made my insides feel as stirred up as the soup. As much as I liked the glare, it was kind of like the sun in that I couldn’t look at it for very long.

“Sorry,” I said. “I’ve been thinking about exams. I should be studying right now, in fact.”

He looked unapologetic as he reached into a drawer and got out a pair of tongs, which he handed to me so I could dig out the drowned spoon. “You can go study when the prep for tomorrow is done.”

I turned toward the pot and pulled out the big spoon, wiping off the handle with a cloth before I tossed the tongs into one of the big sinks for washing. The clatter of steel on steel was mostly drowned out by the sounds of a busy kitchen that I barely noticed anymore.

“How’s that soup coming?” he asked.

“It could use some more simmer time,” I answered, giving the soup another stir just to have an excuse not to look at him.

He grabbed a soup spoon and stepped up to the stove, dipping the spoon in and bringing it to his lips. Kissable lips. He was so close and smelled intoxicating: a mix of butter and hot guy. I glanced around but everyone else in the kitchen was busy prepping, cooking, cleaning. No one would notice if I leaned in and…

“Uchhh,” he exclaimed after the tiniest of tastes. “This is so bland.”

His glare turned into a disgusted scowl, he shoved the spoon toward my mouth, almost spilling the rest of the broth on my apron. “Taste this. Is this what minestrone is supposed to taste like?”

Although I’d tasted the soup only minutes before, there was no point arguing with him, so I opened my mouth and let him place the spoon on my tongue. Once I swallowed, I stared straight into his eyes, because there was no way I was letting him intimidate me over a pot of soup. “I’m going to say no, since you’re being such a crab about it but I followed the recipe exactly; calm yourself down….” And then I may have called him something under my breath. Which he absolutely heard.