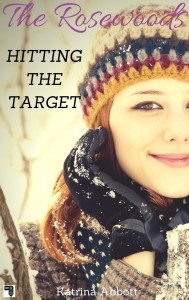 Pick up Hitting the Target, Book 8 of The Rosewoods, at your favorite retailer.

My eyes popped open and my first waking thought was: I am now eighteen! Legal. Well, legal to vote, anyway. I’d been legal to drive for some time, but now… Eighteen seemed so official.

The problem was that I was still in high school and didn’t have much of my life together, so I hardly felt like an adult. Still, I couldn’t really complain: my life at Rosewood was good. I had my good friends and was happy to be back on campus permanently. Until I graduated of course.
Only one thing would make my life complete.

No, I told myself as I rolled over toward the wall, pulling the covers up to my chin, I would not even think that I needed a guy to complete me.
But maybe it was okay to say that having one would complement my life. There. Yeah. Like an extra add-on that I didn’t exactly need. But would be nice to have. Like a sunroof or HBO.

Except that Brady was a feature I couldn’t afford in many ways.

As I lay there, staring at the wall in the darkness, I thought about him and inevitably how amazing he’d looked that day last week when I stumbled in on him in the bunker. He’d been dressed down in jeans and his hair kind of looked like it hadn’t been brushed; he obviously hadn’t been expecting anyone bursting in on his little hideaway. Certainly he would never have expected me, ironically crying because I thought I’d never see him again.
But he’d looked rumpled and confused. Out of his element, which was somehow totally endearing.

We’d talked awkwardly and he hadn’t tried to make a move on me, a fact that I both appreciated and hated. It was totally selfish, but more than anything I wanted him to want me. I wanted him to need me, to be affected by me the same way he made me crazy every time he looked at me with those intense amber eyes.

Every day since then, I’d had to fight myself because I wanted to go back to the bunker to see him. To hear his voice. To step close enough to smell him, even if I never touched him.

But it was a very bad idea and I would just be torturing myself. Because I couldn’t have him.

Why is that again? I had to keep reminding myself of the particulars of our impossible situation so that I wouldn’t decide to just chuck it all and throw myself into his arms. Sometimes I wondered if his resolve was as razor thin as mine. I had a feeling it was. And knowing that made it even harder. Hello, vicious cycle.

Except that if I disregarded all the reasons we couldn’t date and managed to convince him to be with me, I could never live with myself if he gave up his Olympic dreams because of me. I never wanted him to ever look at me and wonder what if? Or worse, resent me because I had killed his dreams (not to mention that hooking up would likely get him fired from working here at the school).

But still, I couldn’t stop myself from thinking about his…

“OOF!” escaped my mouth as all the wind was suddenly knocked out of me. What felt like a full-grown manatee landed on top of my body over the covers. I would have screamed in terror if my lungs hadn’t been empty of every molecule of air.

“Birthday Shamu!” Emmie yelled out from on top of me.

“What the hell?” I managed once I was able to suck in some air.

“Birthday Shamu!” she repeated triumphantly and while I couldn’t see her, I had a feeling she was doing a fist-pump. And as if that wasn’t enough, then she started tickling me.

Suddenly I understood the urge to kill another human being, no matter how much you love them under normal circumstances.

She kept at it until I threatened to barf (I feared it wasn’t an empty threat, either) and then she sat up, still on top of me, but no longer tickling. I grunted as I turned over underneath her and labored to catch my breath.

“What the hell was that?” I said when my heart began to return to a normal pace and breathing wasn’t such a hardship.

She grinned down at me. “The birthday Shamu. You know, like the whale from Sea World, which, don’t even get me started on. But never mind. Didn’t you like it? Are you not familiar with the birthday Shamu?”

“Uh, no. On both counts,” I said, giving her what I hoped was a haughty stare. It probably would have been more effective if I wasn’t on the verge of giggling. “Is it some sort of Rosewood tradition I’m not familiar with yet?”

She shook her head but had that twinkle in her eye. “No. I made it up just now. But it could become a Rosewood tradition.”

“Get off me,” I groaned. “And no, thanks. I do not want any part of that ever again, giving OR receiving.”

Emmie rolled off me so I decided I would let her live. Maybe.

“Why are you even up?” I asked as I stretched and flicked the switch on the lamp beside my bed. “It’s still dark-thirty and you don’t even have to get up early anymore.”

“Old habits.” She shrugged as she dropped onto her own bed. “So. What do you have planned for your special day?”

I rubbed the sleep out of my eyes. “What? Nothing. It’s a Wednesday, so practice and school.” I glanced at the clock and realized Emmie had only beaten my alarm by a couple of minutes. I leaned over and turned it off before I hauled myself out of bed. “I better get moving.”

I was only a few steps away from the bathroom before I heard a humph behind me. I turned toward my roommate.

“You only turn eighteen once, Brooklyn.”

She shrugged. “I don’t know, just…make it count. Do something exciting.”

“I will,” I promised. Though I had no idea how. What kind of excitement was there to be had on campus on a Wednesday?

Turns out I didn’t have to go find excitement; it came looking for me.