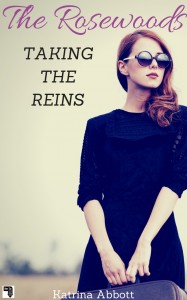 Download Taking the Reins now at Amazon, Barnes and Noble, iTunes, Kobo, or Google Play.
Or get it for audio at Audible, Amazon, iTunes.

By the way, if you’re new to audiobooks and they aren’t available via your local library (via Overdrive or Hoopla), you can try them for free at Audible – just sign up for a free trial and you can get Taking the Reins and another audio book for free!

Excerpt from Taking the Reins:

I should have felt insulated and safe in the back of the Town Car.
Instead, my heart was pounding like crazy as the driver pulled into the long circular drive that would bring me to the front of the Rosewood Academy for Academic Excellence—my new home for the next ten months. The windows of the car were tinted, so no one could see in, but as I was in one of several limos (mixed in with Range Rovers, Audis, Mercedes’ and other cars of the famous and wealthy), no one really paid attention. And, gauging by the chaos on the front lawn of the school campus—registration, moving in, laughing and getting reacquainted—people were too wrapped up in their own stuff to notice a new girl, anyway.

I sighed and gave myself a couple moments to calm my nerves as the driver rolled to a stop at the curb. I took my long brown hair out of the ponytail holder, then second-guessed and put it back in again. Then realized it would look sloppy to have a ponytail, so I took it out one last time.

God, Brooklyn, get it together.

The driver put the car into park, turned halfway toward me and smiled. “This is it.”

“Yeah,” I said, glancing out at the crowd. There were several tables, including one with a banner that read, “Check in. Come here first.” Brilliant. At least that part was sorted. The fitting in and making friends part couldn’t possibly be quite so easy.

“It will be fine,” the driver assured me, as though he was reading my mind and standing in as my father or something, making me feel guilty that I’d forgotten his name already. “I hear it’s a good school.”

I almost snorted at his comment; Rosewood wasn’t a good school. Rosewood was the best school. The school governors and celebrities send their kids to. The place where no one asks how much the tuition is, because if you send your kid here, you can afford whatever it is and don’t care what it costs, as long as your child is getting the best education money can buy. Of course, this isn’t what the brochure says, it’s what I heard my dad tell my grandmother when he phoned to tell her he was sending me back to the States. He said he didn’t feel I was getting a quality education at my last school in London. Which is kind of ridiculous, because I’m pretty sure the Brits invented proper education, right?

Looking up at the big building now, I had seriously mixed feelings; I’d never been a huge fan of the school in London or maybe being in London altogether, and getting away from my parents was a distinct benefit. They were still there; probably it would be another year before they would move back to the States (though they promised to come for Christmas). But I knew exactly no one here at this school, and my old friends from before I left the U.S. were states away in Colorado, not exactly close enough to meet up for pizza on the weekend. And anyway, after two years away, we probably weren’t really friends anymore. We’d become what Mom called “Christmas Card Friends”—meaning we caught up like once a year and didn’t care for the other three-sixty-four.

At least in London I had some friends. Not super close ones, but still, friends I’d had to leave behind and would probably never see again who would also become “Christmas Card Friends”. At least I didn’t have a boyfriend I had to worry about leaving. No, leaving a boy behind had never been an issue for me; on the contrary, I was pretty much boy-repellent. Not that I was ugly or anything, I just wasn’t the fun girl or the popular girl. I was the plain girl: brown hair and eyes, a few freckles across my nose, average build. Not overly smart, not overly pretty: the girl no one noticed.

But as I looked out at the crowd consisting of what would be my fellow students, I thought maybe I could change that. Maybe this would be the opportunity to reinvent myself that I’d been too chicken to take when we moved to London. Back then, I’d been shy and insecure; starting at a new school in a different country will do that. But now, I was back on home soil and could, as Dad would say, ‘fake it till I made it’. And since Dad had paid whatever ridiculous amount of tuition it had cost to send me here, I had just as much right to be here as anyone else. I had no reason to be insecure or feel like I didn’t belong here.

We came from old money that had little to do with my dad, even though he was a high ranking military strategist and probably made a lot of money at it. I think my coming back to the States for school had more to do with that than my education. A lot of Dad’s job is classified, and based on all the recent late night and closed-door whispering on the phone and with Mom, I got the impression he was going out on a very classified assignment. My brother Robert, older by almost three years, was already far away at Yale doing his MBA, so I was their most immediate concern.
It would be easy for me to take it personally that they were sending me away, but I knew a lot of what they did was for my own safety. It had always been that way for Robert and me.

We weren’t even allowed to use our real last name; Dad said if terrorists or other bad people knew who we were, they could use us to get to him and that made us a liability. I was so used to having a fake last name, I barely remembered my real one anymore.

It sounds cool and all spy-thriller, but trust me, after seventeen years of growing up with a military strategist, I knew it was mostly meetings, sitting around, and waiting for stuff to happen that almost never does. I can’t talk about what assignments my dad has been on, but some of them were really big deals that were sort of world security things. But even those required a lot of sitting around and meetings.

Still, despite my dad’s cool-sounding job, I was certainly no celebutante, although thinking about how I might actually end up rooming with one made my right eye twitch. But there was nothing for it and I couldn’t stay in the Town Car forever.

Even as I thought this, the trunk popped open behind me.

I took a breath.

“Let me help you with your things,” the driver said, getting out of the front seat and hurrying to open my door. As I stepped out onto the driveway with my backpack and my carry-on suitcase, he moved to the back of the car, grunting as he hauled out my steamer trunk. I looked around for a cart or something, suddenly worried that this poor man was going to have to haul my year’s worth of clothes up what looked like at least fifteen stairs just to get to the main floor door. I had no idea where my room might be, but I hoped The Rosewood Academy for Academic Excellence had an elevator if it was anything beyond the ground floor.

It was the least the school could do, since it was lacking the one thing I argued with my parents was the most essential requirement to a girl’s social development: boys.