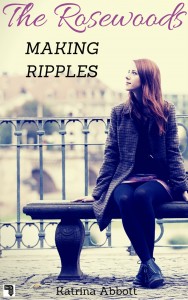 Making Ripples, book 6 of The Rosewoods, is available at your favorite retailer.

Cabin fever is a real thing. I know this because my dork of a brother Robert has watched every single episode of Mythbusters and they did a show about it a few years back. I never could have known at the time that I would use this knowledge to convince my father to get me and my mom back to civilization. But whatever—I did what I needed to do, because I was going nuts.

And my mother hadn’t been faring much better, either. In fact, our secluded little ‘holiday’ in Switzerland was nowhere near as romantic as you might think. The days without modern conveniences—ones that I had previously thought of as necessities—were dragging very long, causing our nerves to wear extremely thin. I had caught up on all my schoolwork (because I had nothing better to do) had done a million Sudokus and had even started getting my mom to teach me to knit when her hands got tired of working on her own projects all day. Yes, I was that desperate.

The second we’d walked into the cottage and I’d realized just what my Dad meant by completely off the grid, I regretted not grabbing Jared’s manuscript before I’d left Rosewood. There was no telling when I’d even be able to get it back to him, so I guess it was for the best. For him, at least.

I’d tried to start a journal, but it quickly got pretty boring since I wasn’t about to write anything my mother might read, so that got abandoned early on.

Mom and I passed a good bit of time by needling at each other. I usually got along pretty well with her, but days on end with no TV or internet, along with her snoring, incessant questions about things I didn’t want to talk about and hand-wringing over whether we’d get out before Christmas, and I’d pretty much had it. Don’t get me wrong, I was no peach to live with either; I knew that. But we were not made to live in such close quarters without activities or escape and it was amazing we hadn’t killed each other.

The one upside to all this was that I had a new appreciation for those early settlers who lived in their sod huts and had nothing but each other and hard work to fill their days. Actually, at this point, hard work didn’t sound so bad.

So when Dad finally radioed us to say the immediate threat was over and that his team had infiltrated and shut down the terrorist cell that had been behind the threat I’d received on my phone back at school, we packed up our things faster than you can yodel (Swiss Alps). Dad wanted us to stay put for a while, but even Mom was willing to take the risk, so within a few hours we were on our way to Geneva where we got on a train to London.

Returning to London was half the battle. The other half was getting my parents to let me go back to the States and Rosewood. Okay, maybe getting back to London was five percent of the battle, because I knew I had the fight of a lifetime still ahead.

But I had to get back. The quiet in that cottage had given me nothing but opportunities to think about what my life had been like at Rosewood, and although things had gotten a bit crazy at times, I realized now I loved it and was desperate to go back to my friends. And, of course, Dave.

Dave. The guy who returned from his Thanksgiving weekend at home with his family to find me gone. And even worse, Emmie probably had to be the one to tell him I’d left. I felt horrible about leaving my friends the way I did. I didn’t have any choice, and I guess deep down, I’d always known having to bolt with no notice or explanation could be a possibility. That didn’t make me feel any better about it, though.

As Mom slept in the seat beside me on the train, I looked out the window at the landscape passing by, but thought about what had become my world half a planet away. My world where I’d had a boyfriend and better friends than I’d ever had before. Better friends than I ever thought I would have. And the boyfriend part? Don’t even.

I wiped away a tear as I thought about my dad and how freaked out he’d been when I’d first returned after receiving that threat. He wasn’t going to give in easily. The good news was I had over seven hours on the train to figure out my strategy.

“No. You’re not going back there.”

So much for the just ask strategy.

My father slammed his palm down on the table, making the cutlery and dishes hop and clatter. Mom squeaked as she startled in her chair. “That’s enough, young lady,” Dad said through clenched teeth. “You made your case, and I said no. Repeatedly. It’s too much of a security risk to have you out of the country.”

“But I’m no safer here,” I said, reaching out my arms to indicate our new London flat. “ISIS is just as much a threat here in London as it is in the States. Probably even more here.”

He gave me an incredulous look. “You think I don’t know that? It’s my job to know exactly how much danger civilians are in. To calculate the potential death tolls in myriad situations, especially in populated cities like this one. It’s why you went to that school in the first place. But things have changed and I just can’t take the risk of having you so far away. Do you have any idea how much pressure we’re under?” He blew out a long breath and scrubbed his reddened face with his hands, pushing his glasses up on his head to rub at his eyes. Which was the sign that I had just pushed as much as I could. One more nudge and he would blow his stack and there would be no reasoning with him.

I glanced at my mother and she gave me a shake of her head that said: back off. It was unnecessary, but I nodded at her anyway so she would know I was done. For today.

When he was done rubbing at his eyes, he looked up at me. It seemed he wasn’t quite finished making his point. “Someday, when you have kids of your own, you’ll understand why I want you close.”

Great. The “Someday when you have kids” speech. I sighed, resigned to leave it for now because I didn’t need him to actually have the heart attack I’d told everyone at Rosewood that he’d suffered. Anyway, I still had some time; it was too late to make it back to school before the Christmas break, so I was working toward returning in the new year, which meant I had time to convince him.

“What happened to you at that school?”

“What do you mean?” I asked warily, worried he was looking into my thoughts and knew I’d been thinking about getting back to Dave and how we’d never gotten a chance to redo that kiss. The one that had started off great, but went very wrong when he’d had the allergic reaction.

“You’re different now. You’ve never been this committed to your school before.” He gave me a sideways glance. “What are you up to there?”

Making Ripples, book 6 of The Rosewoods, is available at Amazon, Google Play, Barnes and Noble (Nook), iTunes, and Kobo.

One thought on “Making Ripples”