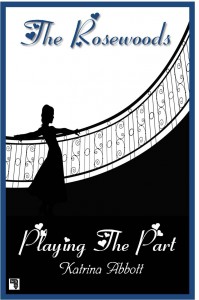 Book 2.5 in The Rosewoods series is out! Playing the Part is Kaylee’s story. It’s full of the same flirty fun you’ll find in the rest of the series, with the clever girls of Rosewood and the cute guys of Westwood.

You can pick up Playing the Part at Amazon, iTunes, Barnes and Noble, and Kobo.

Kaylee Bennett has never felt like she really fit in at The Rosewood Academy for Academic Excellence, but this year she feels even more like an outsider. Life has done a one-eighty for Kaylee and as she returns to the posh school for girls, she can’t bring herself to tell her secret to her friends and definitely not her long term crush, Phillip Carson. Not that Kaylee could ever imagine he would be attracted to a quiet bookworm like her anyway. But then there’s Declan Ryan, the gorgeous exchange student who seems to be interested, until Kaylee finds out his secret and why he might actually be into her, and it has nothing to do with her charm or love of English literature.

To complicate matters, Kaylee gets stuck running the school’s production of Romeo and Juliet, directing both Declan and Phillip with the help of Rosewood’s sexy first year teacher, Mr. Stratton—as if the Westwood boys weren’t enough of a distraction!

Determined to stay away from Declan and make things work with Phillip, Kaylee isolates herself from her friends and hides out in the house of cards she’s built to protect herself, but how long will it stay standing?

Also in this series:

To celebrate the release of Playing the Part, I’m giving away a $25 GC to Amazon.com! There are loads of ways you can enter, and I really hope you’ll have fun with this. Choose your favorite Westwood boy, then spread the word by posting his photo! The entry form and rules can be found below. Good luck, and thanks for stopping by!

Swoon! No wonder Brooklyn is having a hard time choosing!

May 1, 2014
Uncategorized No comments katrina_abbott
← Get Ready for Masquerade! (And 2 Giveaways) Taking the Reins 99 Cent Sale! →
Author gone underground for a special young adult project. Writes about cute boys and smart girls.